Razgatlioglu and Rea were involved in their most high-profile incident yet in Sunday’s second full-distance race at Assen, the pair crashing out simultaneously after making contact during their lead battle exiting Turn 1.

Both riders blamed each other for the collision, each saying the onus was on the other rider to avoid the crash.

It followed a number of close calls between the two during their bitter title rivalry in 2021, with Rea suggesting Razgatlioglu was too aggressive in battle at Portimao and the Yamaha rider hitting back by calling his rival “scared”.

Bautista, who had a front row seat for the latest incident between Razgatlioglu and Rea from third position, didn’t want to point fingers at any one rider, but felt that it was a matter of time before they were involved in a major crash.

“It seems like Toprak went a bit wide, so he went over the kerb, but not out of the track – just on the kerb,” recalled Bautista. “Jonathan was on the inside but behind.

“Jonathan was faster, looking for a normal line. But Toprak was on that line [already] so they stayed together in the same place at the same moment – and there is no space for two riders and they touched.

“They touched in the past, but this time it happened [that they crashed]. One time it has to happen because we see many many impacts from them in the past.

He added: “[Razgatlioglu] tried to recover the line and Jonathan was on the correct line. For sure Toprak cannot see if Jonathan is coming or not.

“The rider who is behind has to see the other rider. [You cannot just say] ‘Okay, he went out, I just look at the next corner and do my line’.

“And the rider on the outside is in front, so he cannot see who is coming from behind, and maybe Toprak thought that if somebody comes, he will see him. So it is complicated to say something [about who is to blame].” 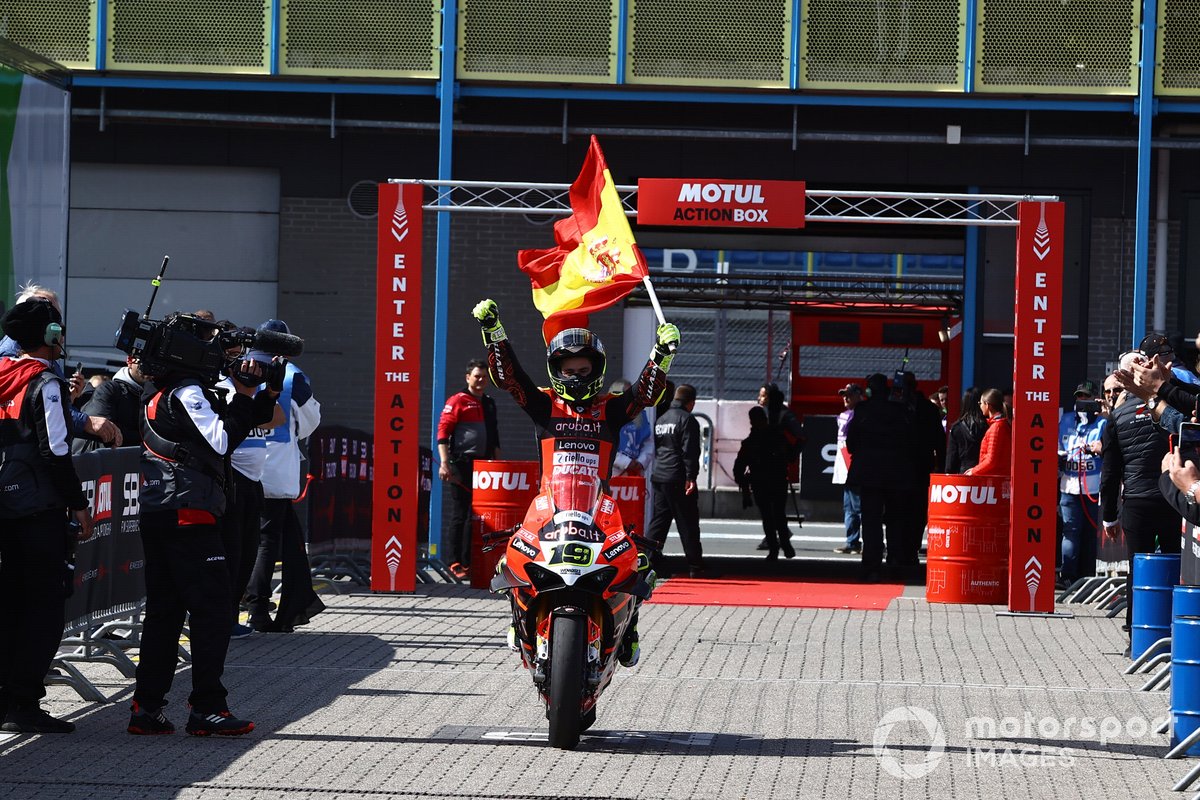 Bautista was the biggest beneficiary from the altercation between Razgatlioglu and Rea, as it allowed him to take a dominant victory and retake the lead in the championship.

The Ducati rider now finds himself 18 points clear of Rea in the standings, with Razgatlioglu 45 points adrift after failing to win a race in either of the first two rounds.

While admitting that luck was on his side last weekend, Bautista said he was more happy about the set-up breakthrough that allowed him to be in the hunt for victory in the first place.

“On Sunday morning in the warm-up my team changed the set-up of the bike,” said the Spaniard. “Sometimes you have good luck, sometimes your time. For me right now the championship is not important.

“I’m happy not because I won, today I’m happy because I recovered again a good feeling with the bike and that’s important.

“This is the important thing to win a championship, to have a good feeling with the bike, to go fast but always stay within the limit – just to have a bit of a margin.

“From Friday to Saturday here I didn’t have a feeling like in the winter test. We compared what we had before and what we have now, and there was a big difference.

“There was something wrong with the bike but fortunately we found the solution and suddenly this Sunday morning I felt ‘boom, again fast’.”

How to watch Ajla Tomljanovic vs. Veronika Kudermetova at the WTA Toronto, Canada Women Singles 2022

How to watch Madison Brengle vs. Cori Gauff at the WTA Toronto, Canada Women Singles 2022

11th August 2022
PRETORIA - South African female scientists have been celebrated for their breakthrough medical innovations by the US Secretary of State. Antony Blinken concluded his tour of the country by meeting some of them at the Medical Research Council. This week he announced the US’s new sub-Sahara Africa strategy which includes more cooperation between local scientists…

Stock Radar: This aviation stock can give 20% returns in a year

US strategy for Africa just a stunt to smear China, says Chinese embassy

11th August 2022
Please enable cookies. You are unable to access iol.co.za Why have I been blocked? This website is using a security service to protect itself from online attacks. The action you just performed triggered the security solution. There are several actions that could trigger this block including submitting a certain word or phrase, a SQL command…

11th August 2022
Please enable cookies. You are unable to access iol.co.za Why have I been blocked? This website is using a security service to protect itself from online attacks. The action you just performed triggered the security solution. There are several actions that could trigger this block including submitting a certain word or phrase, a SQL command…

11th August 2022
Young Hong Kong democracy activists Joshua Wong, Alex Chow and Nathan Law were released on bail from jail on October 23. They will now appeal against the prison sentence for their role in the 2014 Umbrella Movement. Hong Kong’s version of “Occupy Wall street”, the Umbrella movement against Beijing politics was the most important protest…

Stock Radar: This aviation stock can give 20% returns in a year

US strategy for Africa just a stunt to smear China, says Chinese embassy

Stock Radar: This aviation stock can give 20% returns in a...